Some processing is carried out to obtain shapes with a larger surface area exposed to the sound source, such as embossed and pyramidal or wave shapes, which allow the further enhancement of this property, as well as obtaining standardized, easily assembled, lightweight panels, whose shapes can be used to create interior design.

The materials can be tested at different degrees of fire resistance, from delayed combustion to self-extinguishing, according to the main tests used in the field; they can be protected by a film that makes them washable (only on smooth panels) and have different densities, making the range complete in terms of both performance and price ranges.

Expanded polyurethanes, whether polyether or polyester based, work particularly well on medium and high frequencies; to obtain a small-size panel that is effective also in the presence of low frequencies, it is necessary to add a soundproofing membrane of high specific weight. This is then applied on the back of the panel, functioning better in a sandwich system with a layer of 5 or 10 millimeters of final polyurethane.

Let’s take a look at the main types of processing available:

A sheet of polyurethane is deformed by two toothed rollers which, rotating against each other like two gears, crush and push the material against the blade, which is located immediately behind them and splits the sheet while it is still deformed; this results in many points located side by side, forming the embossed surface of the sheet.

This is a rather quick and economical process that gives off no waste, as from one starting plate one obtains two interlocked final plates, one of which is the negative image of the other.

However, since this is a deformation cut, it has dimensional constraints beyond which it cannot be pushed, as the plate to be embossed cannot be thicker than a certain value, depending on the density of the material.

By varying the initial thickness of the plate to be processed and moving the rollers closer or further away from each other, it is possible to obtain a number of different types of embossing suitable for the most diverse uses. The embossed material can then be cut with vertical pantographs, with plotters, it can be die-cut and adhesified or glued.

The pyramid shape is obtained with a horizontal pantograph, in which the blade cuts a zigzag through the thickness of the sheet; after the first cut, the material is rotated by 90°, always horizontally, and the zigzag is repeated identically.

In this case as well, one obtains two interlocking slabs, but there is a little waste in the inner part between the pyramids.

Cutting is much slower than embossing, but it has the advantage of obtaining panels with the pyramids ending at the edge of the slab, thus allowing for a perfectly professional assembly, with all the joints aligned.

Moreover, there is no dimensional limit in the height of the pyramid to be obtained, except for that of the size of the starting block, and as a consequence, one can also make very large shapes, such as those designed for anechoic chambers.

A very thin film can be applied to the smooth surface of a panel, by gluing or thermofusion (if the material is polyester), which makes it impermeable to pollutants, and for this reason it is often identified as an “anti-oil” film.

The anti-oil film can be made of polyethylene, which has a higher thickness and low elongation resistance and is therefore subject to deformation when stressed, or polyurethane; the latter has an elongation capacity of over 200%, and is therefore practically free from surface deformation; it is also very thin and brings less deterioration of the acoustic properties of the underlying material.

The thicknesses in stock generally range from 10 to 50 millimeters.
Additional surface films can be applied, such as a thin layer of aluminum, which reflects heat and mechanically protects the polyurethane surface.

On the opposite side, the material can be adhesified.

The panels thus obtained can be cut with pantograph, with plotter, water cut or die-cut.

Polyurethanes lend themselves to many types of further processing, and in particular they can be cut and shaped with pantographs, adhesivized, die-cut, cut with water jets or with plotters and milling machines, in order to obtain a multitude of shapes widely used at the industrial level in the fields of electronics, automotive products, civil engineering and machine tools of any type.

The main alternative material used for soundproofing is expanded melamine.

It also comes in blocks, and can therefore undergo all the processes described above for polyurethane.

Melamine is very light, weighing only 11 kg/m3, and passes very high fire resistance tests, superior to any polyurethane foam that is not impregnated with fire retardant resins.

Impregnated polyurethanes are products that have undergone a post-treatment of impregnation with a resin that improves their fire resistance characteristics.

They have a higher density compared to standard products (between 50 and 100 kg/m3) and are generally available in rolls with thicknesses from 5 to 20 – 30 mm. They
can be die-cut, shaped, adhesified or laminated to a fabric.

Other materials such as polyethylene, or elastomers such as EPDM or CR, are able to perform a soundproofing function at very reduced thicknesses, often combined with thermal insulation and anti-vibration properties thanks to the specific weight they can reach and the closed cell structure that does not allow the air to move inside them. 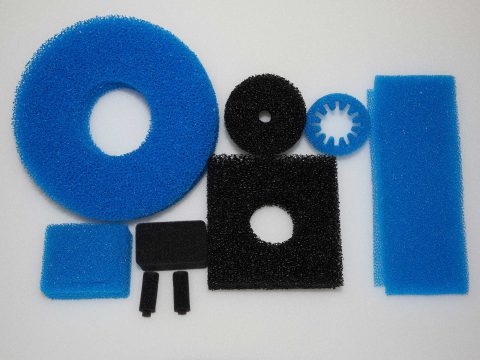 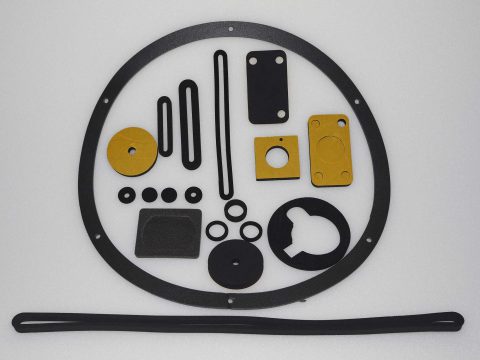 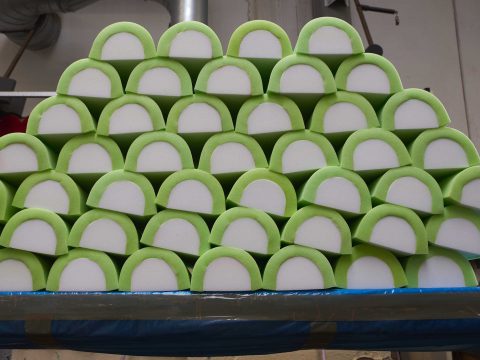